Disney’s “Aladdin” is a thrilling and vibrant live-action on adaptation on of the studio’s animated classic. It is the exciting tale of charming street rat Aladdin, the courageous and self-determined Princess Jasmine and the Genie who may be the key to their future.

The Live Action Aladdin stars Will Smith, Mena Massoud, Naomi Scott and is directed by Guy Ritchie! fAlan Menken provides the score, which includes new recordings of the original songs written by Menken. (read my interview with Alan Menken here.)

The Magical Story of Aladdin

The streets of Agrabah are home to Aladdin, a lovable street rat who is eager to leave his life of petty thievery behind, believing he is destined for greater things. Across town, the Sultan’s daughter, Princess Jasmine, harbors dreams of her own. She longs to experience life beyond the palace walls and use her title to better serve the people of Agrabah, but her father is overprotective. Jafar  his loyal and trusted advisor and a powerful sorcerer, is frustrated with the Sultan’s passive stance on Agrabah’s future and is devising a plan to assume the throne himself.

Aladdin comes to Jasmine’s rescue when she visits the marketplace disguised as a commoner and is immediately struck by her beauty and fiery spirit, having no idea as to her true idenity. Following her back to the palace, he gets caught up in Jafar’s evil scheme and comes into possession of a magic oil lamp intended for Jafar and accidentally conjures up the Genie (Will Smith) inside. A colorful and larger-than-life presence, the Genie grants Aladdin’s wish to become someone worthy of Jasmine’s love and the Sultan’s respect: Prince Ali. As Aladdin and the Genie become friends, Jasmine too, succumbs to his charms, and together they embark on a dangerous and exciting adventure that will test their faith in themselves and their love for one another.

Producer Jonathan Eirich has loved Disney’s animated classic “Aladdin” since he was a child, and over the years has entertained the idea of bringing it to life as a live-action on movie on the big screen. Eirich shared the idea with Dan Lin, the founder and CEO of Rideback, the production on company where Eirich serves as president, who agreed there was a unique opportunity to update the original 1992 film. “It’s a great love story, but it’s also a great friendship movie and a great buddy movie,” says Lin. “So on one hand you have a classic romance between Aladdin and Jasmine, and then you have this growing friendship between Genie and Aladdin.”

“The challenge then became, how do we make it as fresh as possible to ensure we are still giving audiences something new, while delivering on what they love?” “Aladdin” is an everyman’s story with a classic narrative and universal themes that appeal to multiple age groups and demographics, and as producers they were sensitive to keeping one foot in the past, in the familiar, and the other foot in the future and the unfamiliar.

“We just needed to find ways to further enhance and contemporize it.” John August (“Dark Shadows,” “Big Fish”) soon delivered a screenplay that was a more modern retelling of the story. When Guy Ritchie added his signature touch to the script and signed on to direct, things began to fall into place.

Bringing this story to life on screen required the latest in state-of-the-art technology. The filmmakers enlisted the support of visual effects powerhouse Industrial Light & Magic under the guidance of visual effects supervisor Chas Jarret). While there’s a strong fantasy element to the story, the world needed to feel grounded with environments and characters that were plausible, so our environments were inspired by real locations and the characters leaned towards naturalism, rather than caricature.”

Ritchie has always been open to trying new technical methodologies in his films, and Jarrett ’s team certainly pushed those boundaries. For the times when digital sets and extensions were necessary, Jarrett ’s team used scans and plates of locations in Morocco and Jordan to make sure they stayed grounded in reality. 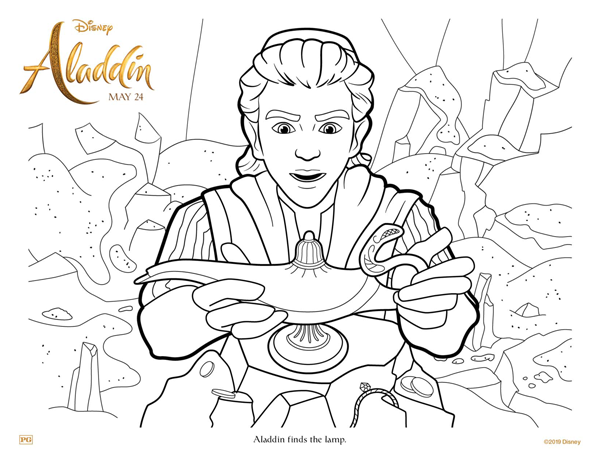 Sign up to receive emails with Disney coloring pages as they come in!

Need more coloring sheet and free printables? Try out some of these with your kids: