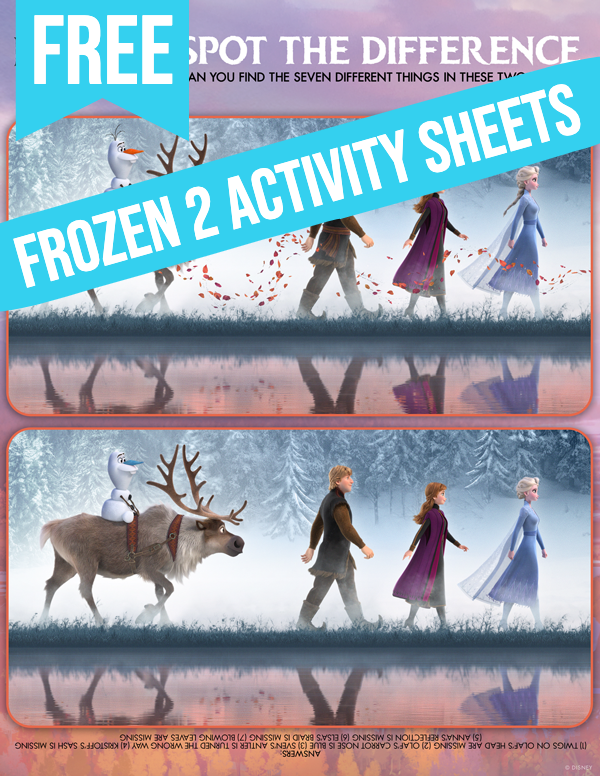 The new Frozen 2 movie from Disney is coming out ok November 22!! We are beyond excited and are gearing up for the fun with these Frozen 2 activity sheets.

Why was Elsa born with magical powers? The answer is calling her and threatening her kingdom. Together with Anna, Kristoff, Olaf and Sven, she’ll set out on a dangerous but remarkable journey. In “Frozen,” Elsa feared her powers were too much for the world. In “Frozen 2,” she must hope they are enough. “Frozen,” which opened in 2013, is the highest grossing animated film of all time in worldwide box office.
“Frozen” won an Academy Award® for best animated feature film of the year. The film’s iconic song, “Let It Go,”
with music and lyrics by Kristen Anderson-Lopez and Robert Lopez, also won an Oscar® for best achievement in music written for motion picture, original song.

The first activity sheet is spot the difference. Anna and Elsa are wearing their new outfits in the printable. If you have a colored printer this would be a great printable. I like to get my colored sheets printed at a shop rather than printing them at home. You can also print this for a party or a play date that you might be having during the winter. The next activity sheet bundle are these memory cards that you can print and cut out. They have the new outfits from frozen to that Anna and Elsa are wearing. Memory games Exercise children’s brains and help with memory and cognitive ability. They also help with concentrationAnd helps train the kids brains for visual memory.
We love learning in our house and this is a really fun way to incorporate our favorite characters into learning.

Here are some more Disney Printables to check out and download!