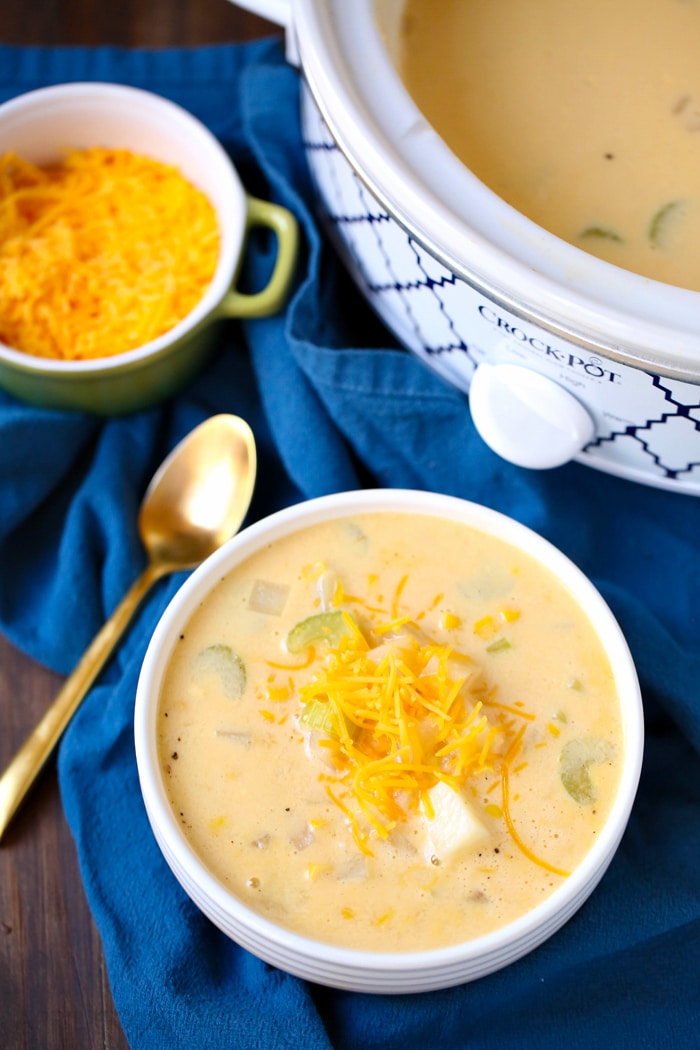 Jump to Recipe Jump to Video

How do you make easy slow cooker potato soup? This is one of those winter soup recipes that you will make once and never need the recipe again because it’s so simple to memorize. There are only a handful of ingredients! During the cool weather, I just love making a tasty potato soup.   They make you feel all comfy and cozy. You will be ready for the cold weather after you eat this soup.  It is a very satisfying dinner loaded with potatoes and cheese. My husband fell in love when I made it for him.

I think it was the amazing creaminess of the Velveeta mixed with the heavy cream. Then you can’t beat the delicious cubes of potatoes and celery. This potato soup recipe is extremely easy to make with barely any prep and the slow cooker makes it a simple set it and forget it cooking experience. You can tons of topping option, like green onion, bacon, and olives. Add all of them and even more! We are trying to skip the meat this year, but feel free to add it!

You can also add more nutrition to this creamy soup by adding some peas and green beans too. Don’t forget to pin this post to your recipe Pinterest board. It’s such an easy soup to make and completely homemade.

Here is what you need from the store before you start making the soup. Even though this soup is homemade, it’s still one of the easiest soups I’ve ever made. Here are the step by step instructions. You can print a recipe card at the bottom of this post.

First, combine all ingredients except cheeses in a slow cooker, cook on medium for 4 hours. Next, add in cheeses, cook another hour, stirring occasionally. When you cut up your potatoes, keep them bite-sized. Food prep is one place I tend to want to rush. But if you take time to cut them in small cubes, they will cook faster and be easier to eat. Finally, just serve with cheese topping, green onions, bacon, or black olives. That is it!

I told you it was the easiest thing ever to make!

What kind of potatoes are best for soup?

I used Yukon potatoes. They are a fantastic all-purpose potato that works in almost any recipe.

You can also use red potatoes. Red potatoes have a really low starch content that makes them a perfect addition to soups. What do you serve with Potato Soup?

This potato soup is a meal all by itself. It’s so comforting and filling! But if you want to make one of the best fall dinners ever, then here are some things to serve along with your bowl of soup.

Here’s an image that is perfect for your Pinterest board.

Did you enjoy the easy potato soup recipe? Here are some other dinner idea for cool fall evenings.